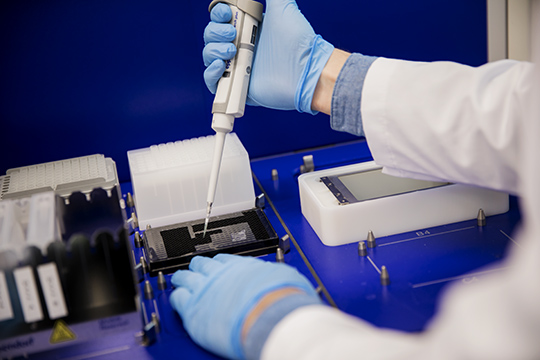 As we age, our immune system declines – one element is the blunting of the anti-cancer T-cell response by an intrinsic process known as immune-senescence. Diminished T-cell function has been linked to susceptibility to infection and the drastic increase in cancer incidence in elderly mice and humans. The key question is how? Dr. Celia P. Martinez-Jimenez from HPC contributed to a research study led by the De La Roche group (Cancer Research UK Cambridge Institute) that defines age-related changes in the T-cell repertoire enabling tumour growth. The study has been published in the journal EMBO Reports.

Amongst the T cell pool, a class of “unconventional“ cells, γδ T cells, possess a γδ TCR rather than the αβ TCR on the cell surface. γδ T cells combine adaptive and rapid innate-like features to mediate responses to infection, tissue damage and cancer. γδ T cells come in two flavours, an IFN-γ-producing subset with potent cytotoxic function against cancer and an IL-17-producing subset that has recently emerged as tumour promoting by encouraging angiogenesis and the recruitment of immune-suppressing cell types. Thus far, it has not been known how the γδ T cell population in the lymph node changes upon ageing and how these changes may affect the tumour microenvironment.The team has characterised the γδ T cell repertoire in the lymph node during ageing and how this affects the anti-tumour immune response. They found that upon ageing, the pool of γδ T cells in lymph node becomes entirely biased towards the IL-17-producing lineage, and the number of IFN-γ producing γδ T cells is diminished. When a tumour develops, the IL-17-producing γδ T cells become activated in the lymph node, migrate to the tumour and create a pro-tumour microenvironment that’s associated with enhanced tumour growth. This discovery shed a light on potential development of therapeutics specifically targeting elderly patients with a biased γδ T cell pool, with the aim to reduce the susceptibility to cancer.

Hung-Chang Chen, first author, said: “The function of lymph node resident γδ T cells is not well studied and I’m very excited to have uncovered a novel role of these cells in specifying the local tumour microenvironment.”
Maike de la Roche, senior author, added: “To our surprise we found that organismal ageing does not impact on γδ T cell function on a cellular level. Instead we have identified the mechanism by which ageing leads to a dramatic expansion of pro-tumour γδ T cells in the lymph nodes via signals received from the aged tissue. The next step is now to find out whether our findings hold true in the elderly”.

Read the article in Embo Reports