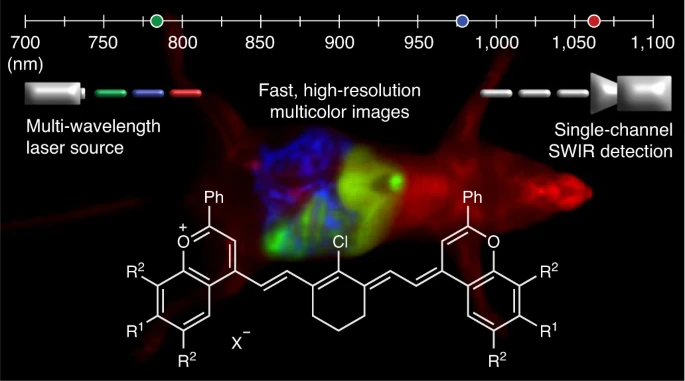 I remember the day that we received the first imaging results using a dye developed in the Sletten Group. The video was attached to an email from Dr. Oliver Bruns, at the time a senior scientist in Prof. Moungi Bawendi’s lab at MIT (Boston). It was a momentous occasion, the final piece of the puzzle for the first manuscript I would author in grad school, and the first publication coming out of my advisor Prof. Ellen Sletten’s lab.

I must have watched that video a dozen times on that day. I was mesmerized and trying to take in each minute detail that can be seen in high resolution and at deep tissue depths—two benefits of using shortwave infrared (SWIR, 1000–2000 nm) detection for optical imaging. Inspired by these images, I remember discussing with my advisor that for a future study, I would like to travel to Boston to help perform imaging experiments. During that conversation, little did I know that one year later, Boston, Massachusetts would be replaced with Munich, Germany and I would be flying across the Atlantic to perform experiments in the newly formed Bruns Lab at the Helmholtz Pioneer Campus.

In the previous work, one of the primary hurdles was an inconsistent and unsafe synthesis of the flavylium, the aromatic heterocycle component of the fluorophore. To circumvent this issue, I developed a more efficient synthetic sequence. This new synthetic route accomplished its goal of improving safety and reproducibility but also gave easy access to synthetic analogues. Upon synthesizing several such analogues , we found that the absorption maxima changed substantially with different functional group substitution. One dye stood out which displayed an absorption profile peak at ~1,060 nm. Excitingly, this dye, which we later named JuloFlav7, was ~35 nm more red-shifted than the previous flavylium dye, Flav7, and was closely aligned to the ubiquitous laser line at 1,064 nm.

"Oliver had a vision for multiplexed imaging in small animals in which colors would be differentiated by the excitation laser, instead of by separate emission windows."

Concurrently, Oliver was preparing to start his independent group and had a vision for multiplexed imaging in small animals in which colors would be differentiated by the excitation laser, instead of by separate emission windows 1. It seemed that this series of dyes, with similar brightness, yet varied and narrow absorption wavelengths could work well to develop the method. We anticipated that with bright dyes which were well-aligned with the laser wavelengths, “excitation multiplexed” SWIR imaging would allow for real-time, multicolor and high-resolution images in animals. The method would benefit from fast electronic switching of laser wavelengths and from a broadened spectral region for multiplexing, including the near infrared and SWIR regions. Importantly, because contrast and resolution changes drastically within detection sub-regions of the SWIR2 , we hypothesized that by keeping the detection window constant, we could maintain similar resolution in all channels.

Planning to use the SWIR emissive NIR dye indocyanine green (ICG)3with a 785 nm laser and the new JuloFlav7 with a 1,064 nm laser, all we needed to realize 3-color imaging was third dye/laser pair that absorbs/emits light between 785 and 1,064 nm. It seemed that the most promising means to realize this goal would be to develop a synthetic analogue of Flav7 with absorption blue-shifted by ~45 nm. With this aim in mind, Oliver ordered the lasers, and I worked on obtaining a 980 nm excitable dye. I was fortunate to have a great team to help in the synthesis and purification of some of these dyes: fellow graduate students Anthony Spearman and Monica Pengshung and undergraduate student Ryan McLaughlin.

"We finally succeeded in obtaining the first real-time 3-color image in an animal."

Once we had synthesized several dye candidates which could be excited with the 980 nm laser, I travelled to Munich and began developing the imaging configuration, along with engineer Shyam Ramakrishnan, PhD student Jakob Lingg, and lab manager Martin Warmer. With expertise from technician Sarah Glasl, we tested the dyes and method in animals. Persuading the technology, chemistry, and biology to all perform together was quite the learning experience, requiring some emergency international overnight shipments of samples, more than a couple 1:00 am phone meetings (due to the 9-hour time difference), and borrowing parts and instruments from a myriad of different labs on the Helmholtz Campus. On the last day of my stay in the lab, we finally succeeded in obtaining the first real-time 3-color image in an animal, and celebrated with glühwein (hot spiced wine) at a Christkindlmarkt in Munich. Follow up experiments ended up taking a few more trips to Germany and help from postdoc Dr. Mara Saccomano and PhD students Bernardo Arús and Kelly Wong. Ultimately, undertaking the development of both fluorescent probes and an imaging system together has transformed our approach to deep-tissue imaging and probe development. We hope that the work will inspire future fluorophore design and optimization as an intertwined marriage between chemistry and imaging.