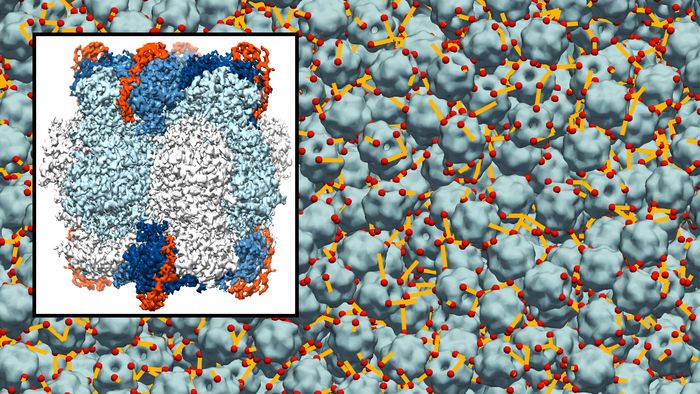 Photosynthetic organisms remove carbon dioxide from the Earth’s atmosphere and convert it into sugars that sustain most of the life on Earth. Algae cells fix carbon more efficiently than land plants by using a special microcompartment in their chloroplast called the pyrenoid. New research by an international consortium including scientists at the Helmholtz Pioneer Campus in Munich reveals how pyrenoids are built, providing a blueprint for engineering this powerful carbon-concentrating mechanism into plants.

In recent papers (1-3), the international collaboration between Martin Jonikas (Princeton, USA), Luke Mackinder (York, UK), Oliver Mueller-Cajar (NTU, Singapore) and Benjamin Engel (Helmholtz Pioneer Campus, Germany) revealed that the pyrenoid is a dynamic liquid-like droplet formed by the phase separation of two components: the carbon-fixing enzyme Rubisco and the multivalent flexible linker EPYC1. The pyrenoid’s liquid-like nature is crucial for its carbon-concentrating function and helps ensure the inheritance of the pyrenoid to both daughter cells during cell division. However, the question remained how the interaction between Rubisco and EPYC1 drives pyrenoid assembly.

Today, this consortium has published a new study in Nature Plants(4) that breaks fundamental ground on the molecular architecture of the pyrenoid. The Jonikas group mapped the Rubisco binding sites on EPYC1, and then together with Doreen Matthies and Zhiheng Yu at HHMI Janelia, used the power of cryo-electron microscopy to resolve the interactions between these proteins at near-atomic resolution (accompanying image, inset). Next, the Mueller-Cajar group demonstrated that these specific interactions are required for in vitro phase separation of Rubisco and EPYC1. To bring these structural insights into the cell, the Engel group used cryo-electron tomography (cryo-ET) to zoom in on the molecular interactions between EPYC1 with Rubisco within the native pyrenoid (accompanying image, background).

This study therefore solves an intriguing molecular puzzle, revealing the inner mechanics of a cellular compartment that is fundamental for life on Earth. Notably, the authors reach a level of molecular resolution that is unprecedented for any phase-separated compartment, making generalizable predictions for this newly-appreciated organizing principle that drives much of cell biology. Ultimately, the new findings on pyrenoid architecture may inform engineering efforts to generate crops that concentrate carbon dioxide more efficiently— improving crop yields while capturing more atmospheric carbon dioxide to combat global warming.

Molecular Landscape of the Cell

Cryo-ET reveals the inner life of the cell with unprecedented clarity. First, cells are rapidly frozen in non-crystalline vitreous ice, preserving them in a state of suspended animation. Next, a focused ion beam is used to thin the cells, followed by cryo-ET to acquire 3D images (called tomograms) of the native cellular interior with molecular resolution. Tomograms enable the visualization of molecular structures directly within the cell, at sufficient resolution to distinguish different conformational states and interaction partners. These structures are than mapped back into the cellular volume with nanometer precision, allowing the analysis of molecular organization within the cell at the scale of single molecules.

The Helmholtz Pi­o­neer Cam­pus is an innovation campus with a startup culture at the Helmholtz Zentrum München. HPC stands for the intelligent fusion of biomedical sciences, engineering and digitization. Teams of top scientific talents from all over the world work together on the development of novel solutions that makes a difference in the prevention, diagnosis and treatment of diseases. HPC aspires the values of Hermann von Helmholtz (1821-1894), a physician and physicist, polymath and science pioneer.