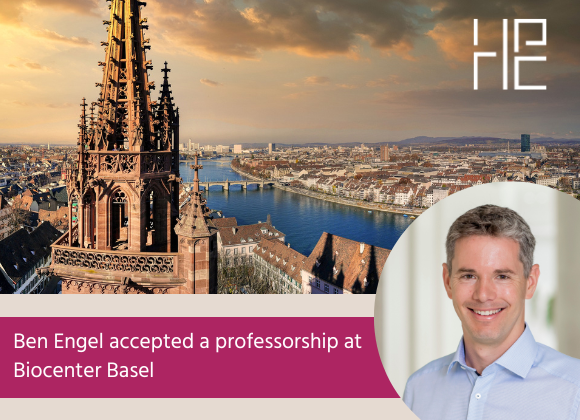 Ben Engel joined the Helmholtz Pioneer Campus as Principal Investigator and head of the Cellular Architecture lab in May 2019.

His research is focused on the fundamental questions of how the organelle architecture controls molecular functions, and of equal importance, how macromolecules define and shape organelle structure(s).

Ben’s outstanding success while leading a group at the Helmholtz Munich’s Pioneer Campus is evidenced not only by numerous highly respected publications in Nature Plants, eLife and most recently a cover story in Cell, but likewise through the successful acquisition of an HFSP grant (among others) and various fellowships to fund his PhD-students and Postdocs (including Boehringer Ingelheim, Humboldt Foundation and most recently EMBO). Ben was also elected EMBO Young Investigator in 2021 and presented a tremendous amount of lectures and talks – as highly sought after speaker at global conferences and seminars.

As one of the protagonists of Cryo-Electron Tomography, Ben adopted and advanced protocols for a variety of photosynthetically active algae, including Chlamydomonas, in close cooperation with many partners - among them the Technical University of Kaiserslautern, Ruhr-University Bochum, McGill or Okayama University – growing and seeding large international scientific networks. His most recent revelation of the structural and functional details of VIPP1, a highly conserved protein responsible for the integrity of all photosynthetic active membranes, won him international recognition and visibility.

After a total of 10 years in Munich, Ben accepted the offer to move to the Center for Molecular Life Sciences at the University Basel at the beginning of 2022. We congratulate him and wish him all the best for his natural progression in any academic career – accepting increased responsibilities and addressing the next level of scientific question in a new – and hopefully similarly inspiring - scientific environment!